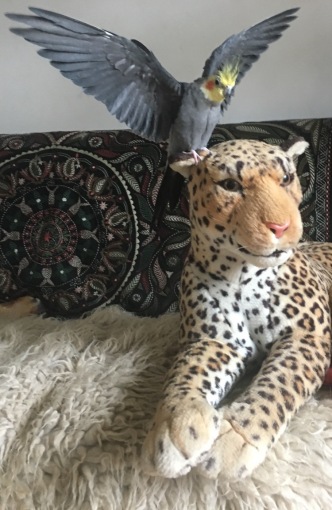 Larry is a rescue cockatiel who came to live with me with his partner just before Christmas 2018. I had just made the decision to finally go vegan, or at least almost 100% vegan after reading up about the Factory Farming of Turkeys. I was distraught how we tend to rave on about our great animal welfare laws in the Uk and in Europe, but the reality of Factory farming of chicken and turkeys and other animals is far from a reminder for great animal welfare. Would you call thousands of turkeys, violently debeaked standing in a cramped space and in their own poo for all of their short life as treated with respect for their welfare? Ia m not even going to begin to talk about hanging them upside down by their feet and seeing their friends hanging there helplessly and then dragging their heads through an electric bath… how can humans treat such magical creatures like birds in this horrendous way and not question it? Anyone who had animals including birds will know that they are highly intelligent individuals. The way we treat animals for profit sadly shows how little we understand about them and how much suffering we cause to billions of conscious and feeling living individual beings a year, that are just as emotionally and psychologically complex as Larry, or your bird or dog or cat or any other companion animal.

I found Larry and his female friend on Gumtree. My response to birdfactory farming was

to at least give those two birds a happy life. The family who owned the two cockatiels fell on tough times and sadly had to rehome the birds, as they felt they couldn’t look after them anymore. They had spent about two years in a large cage and were roughly 3 and 4 years old. They were originally hand-reared, but had hardly interacted with humans for a long time. When they first were let out, there was no way of knowing if they were going to be wild or tame.

Astonishingly enough they immediately loved hanging out with people, but their flying was very clumsy.  Larry was scared of hands and tended to stay just a little further away than his partner. They very gradually adapted to more and more freedom. And it was beautiful to see how they relaxed into their new home and how their relationship improved with the greater freedom they now had. They were so easy going that eventually I threw out their cage and replaced it with an indoor arrangement of branches and a feeding station. They clearly had no interest to fly away whatsoever.

Gradually they got used to exploring the downstairs of the house. It became difficult to have breakfast though, as sure enough they are after a share of my son’s cereal or peanut butter sandwich! Larry stayed just a little more shy than his partner. He liked being near-by, or on my head but if I approached him with my hand he would bite and attack. He obviously had some negative experiences with hands in the past and from what his previous owner told me it sounded like he wasn’t hand-reared in the best of ways. I just kept on telling him that I love him anyway and that I respect his boundaries.

Sure enough the birds started to feel so at home that they began checking out the house for places to breed. Suspiciously they kept walking around behind a fold-out Thai mattress in the living room, and one day an egg rolled out from underneath there. I helped out by placing it in a wooden bowl under there. And then the pair started breeding.

It does feel quite unique to be so close up to nature in this manner and also that both birds have not lost their interest in us humans at all. In fact Larry got tamer than ever. Whenever he was off the nest he came to see me or my son as he didn’t like to be on his own. He started to climb up and down my arm whilst I was trying to do the washing-up and he started to drink from the water tap in the kitchen and finally he let me hand-feed him. He also came in the bathroom to drink from the bath. He played with boiled eggs on the kitchen table, he was very funny to have around.

When I had a guest who isn’t experienced with birds the accident happened. My gueststartled Larry by moving vigorously after he landed on that person’s head. It was just a reaction as the bird landed unexpectedly and from behind. If you are not used to that this can be quite startling in and of itself. Unfortunately the front door was opened at the same moment and Larry missed his usual flight path onto the top of the living room door and as I stood in the front garden I saw him flying off in panic.

The great big sky is a massive surprise to pet birds who are used to living in houses and typically the shock of this dramatic change of environment tends to make them fly far as they don’t know where to land. They then can not find their way home even if they want to. Quite shortly after he escaped he was spotted already hundreds of meters away from his home!

Now the ordeal begun. I frantically run round the area calling his name and also tried to console my guest who felt very guilty whilst I was totally heartbroken.

I announced his loss on Facebook and other lost and found pet searching sites and slept about two hours that first night. I made sure there were windows left open in case he found his way home day and night and I was up searching the area calling his name. His partner was just in shock that he didn’t come for his shift on the eggs and stayed put on the the nest. After over 24 hours I managed to get her out for a moment under huge protest so she would at least have a poo! I placed food and water right by the nest, but I didn’t know if she had any. To me the house felt earily dead without any birds trying to get a sip from my cup of tea or climbing up and down my arm whilst doing the washing up and I felt heart-broken, Larry and I had only just gotten so much more close.I was also worried about Gopsi, his partner. What would happen with the breeding?

After a second day of cycling around the area, calling Larry’s name outside, checking my phone for updates on the Lost and Found Pages and walking around the near-by woods holding my phone in the air playing a film with his own call on it I contacted my friend Samantha for help. She is a psychic medium and she was able to tell me that Larry is alive and in the woods. She also knew that he needed sound to find his way back. But Gopsi was just sat silently on the eggs focusing on the next generation’s survival, so what was I supposed to do? However Sam’s involvement and the knowledge that he is alive gave me hope. So when I went to bed I simply spoke to Larry and said “If you can’t find your way home, you have to land on someone nice who will help you!”

The next morning my mum and I who was visiting drove up to the cafe at Blaise Park, a big Woodland in Bristol and brought them a poster with the bird missing notification. I said that may be he finds his way there as he will be hungry. A lovely cafe worker immediately informed some friends he knew who worked in the woods! Finally I went home and as you do checked my phone again… to find a message from Viking Vets that

they had a bird come in that fitted Larry’s description. Viking Vets was very close to the cafe where I had just been to look for Larry! I immediately grabbed a pet carrier and drove down with my mother who was visiting at the time. We were so excited. It really was him. The story of how he was rescued was extraordinary. Larry had flown to a local  School two miles away form home and interrupted the PE lesson by jumping on different children’s heads. One particularily animal friendly boy called Harry  alerted his

teacher and both of them together managed to pick him of a child’s head and carefully placed him in a box and brought him to the Vets Surgery across the road. The receptionist Chloe had already seen the post of him missing the night before, so she was able to match him up and contact me immediately. How amazing.

Losing an animal to not knowing what happened to it is very sad. We were so lucky. I was able to meet Harry and his teacher Lydia in person to present them with some gratitude and gifts. It is lovely to share this beautiful story with them, that sounds somewhat like a fairytale come true.

Well I do tend to say that nothing is impossible. An unwanted angry bird has turned into 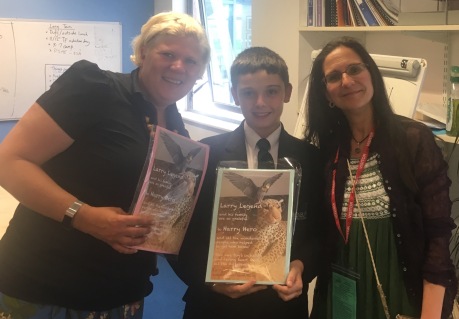 a tame and sweet and funny and trusting local celebrity who even appeared in the Bristol Post. This in and of itself is a remarkable consideration, how life can turn around for an animal as much as for a human. To me these two birds and the other animals we live with are more than just entertainment and fun company. They are teachers and healers and Larry has caused quite a stir with his story in many positive ways, he taught me a lot. For instance that a bonded bird really does love living with its fellow birds and humans and that having

experienced the great freedom of the woods did not change that. My wish for humanity is that we begin to treat animals with the respect and love they deserve, that we reconsider the way we exploit animals for profit, simply presuming that their suffering doesn’t count. It does. Anyone who really lives with animals knows how deeply sensitive they are and that they know fully well what humanity does to them. Let’s evolve and co-exist in peace and love and beauty.